Pages in Game Assets and Art

A few examples of level assets I worked on. Mostly proxy meshes. to develop the design and layout of the places.

I also made quite a few variations using existing textures and other assets as basis. Things like 45 degree corners or door plugs.

I did not make a single texture in the Pre- Sequel. We had a few specialists creating them.

This is a very early test level. I was looking for some forms that resemble the DAHL weapons but weren't already used in Borderlands 2. They also should have a retro science fiction look.

I picked a part of the weapon from the concept in BL2's guideline for DAHL and turned it into a railing.

The larger part of the railings happens to provide some half height cover which is a very good thing if you don't want a lot of weird looking cover objects placed around. 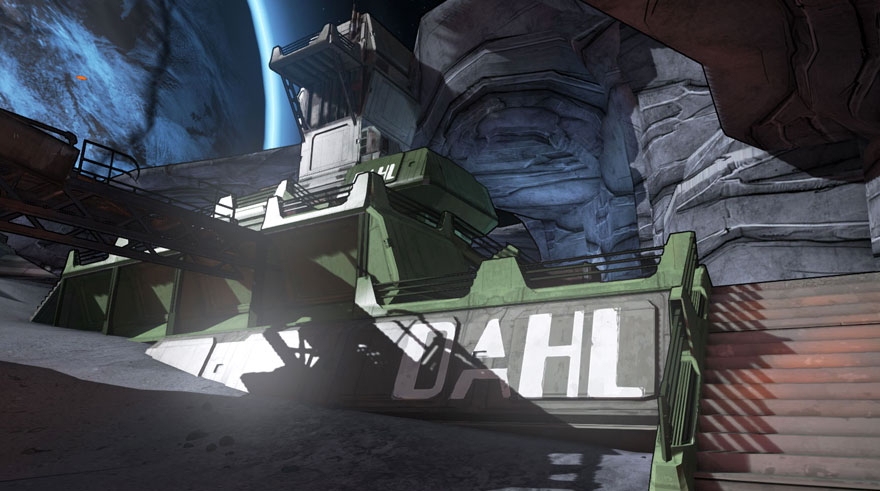 After creating a few proxy meshes with the desired shape Darren (prop artist) took over. He created a good texture for them and fixed any issues with the meshes.

These are some of the final assets. They solve all the design questions we had. A railing for the stairs, a straight segment and a smaller 90 degree corner.

Sometimes there were still some assets missing and I made variations using the already existing texture and meshes.

It's a back and forth with the artist (Darren in this case). These again are the final meshes. You can spot a few in the screenshot below. You'll see them everywhere in the game. 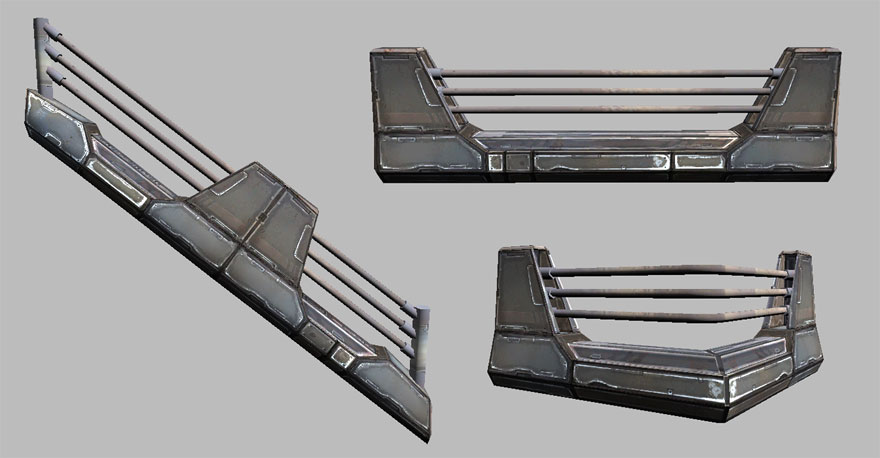 The other early mesh set in the first picture are these simple wall segments. Again here are the final meshes done up by artists.

The shapes didn't really change from the proxies.

When I needed some passing pieces I usually made them from the existing assets. You see a few examples in the package.

Remember this is team work. 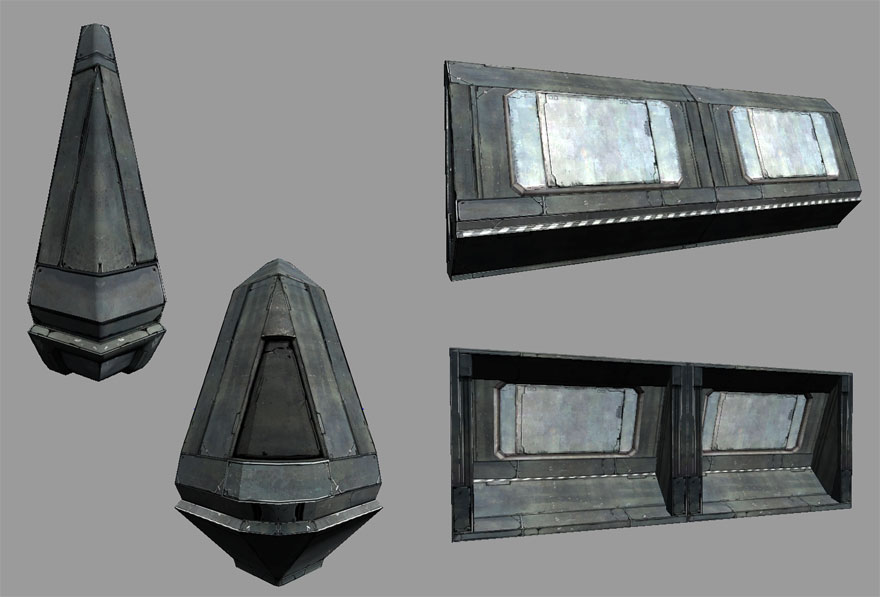 I used those wall meshes mostly as simple filling pieces. Bread and butter meshes if you want.

Not spectacular assets but they survived from the first test levels and worked well together with a few more advanced modules as seen in this image.

Having modular rails and walls we only needed a modular set of walkways to make quick layouts. We actually had 2 sets and they were compatible with the Borderlands 2 meshes. We could simply replace them on the spot with no adjustments needed.

The floor meshes had a decent looking underside and could be used as ceilings too.

Above are a few examples for the walkway modules. There are more assets in this set like 2x2, 2x1 or 4x1 variations with and without a side frame.

Bottom left shows the ramps. Claptrap couldn't walk up stairs in BL-2 so these are hybrids that look a bit like stairs but are actually ramps. Later during development it was decided that we don't care and would use stairs.

Towards the end we had to combine most of the larger walkway areas into big chunks to reduce render time (draw calls) and to save memory. We could also eliminate some of the odd intersections.

We knew there would be a round building as the main observatory in Crisis Scar. After first tests with existing assets Chris made a pretty good concept art for the interior and I created those simple 2 colour assets while building the level.

Looking at this sheet now and comparing it to the shipped game we can see that almost all of the assets kept their initial shape. They were improved of cause, mostly on the texture side. Gearbox did a great job with textures and lighting as I mentioned earlier already.

The three consoles eventually became the signature consoles for the entire game. 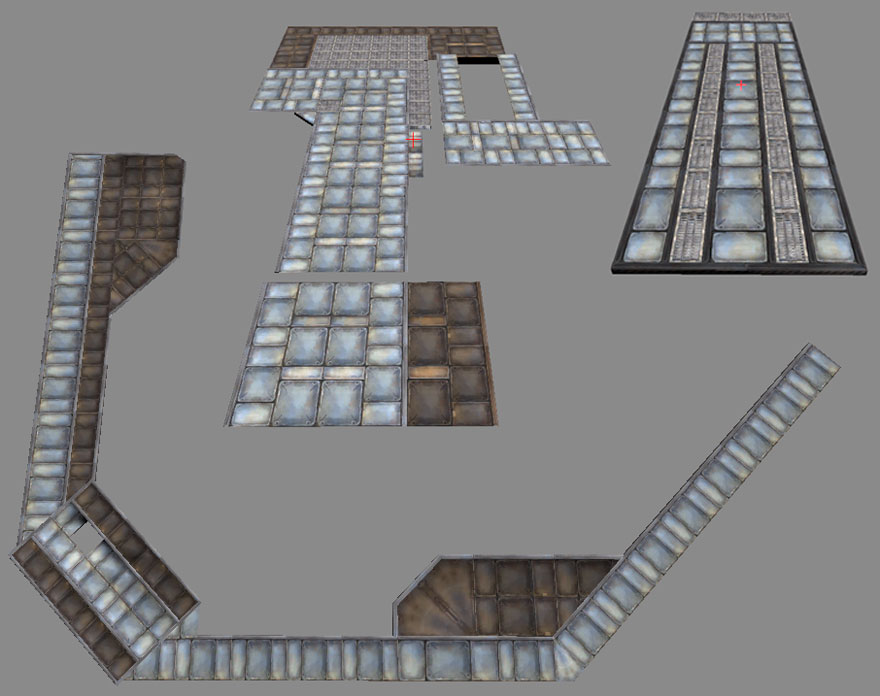 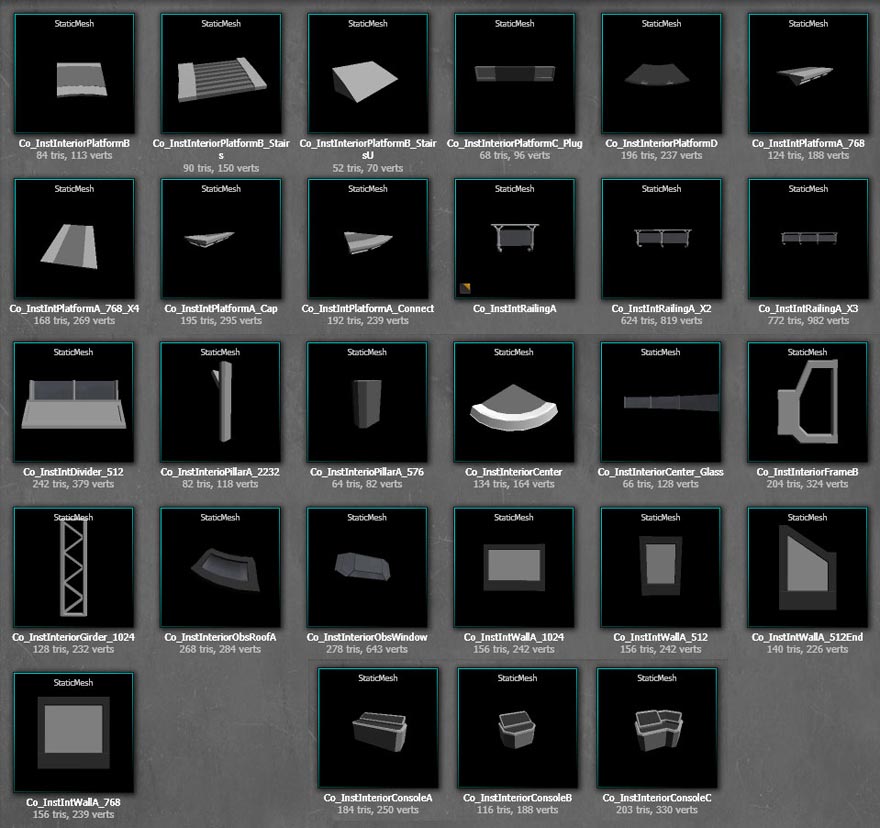 The next three images show the first vignette of the level built with the proxy meshes.

A few minor things got changed by design and had to be adjusted but the proxy meshes were flexible enough to cope with this. 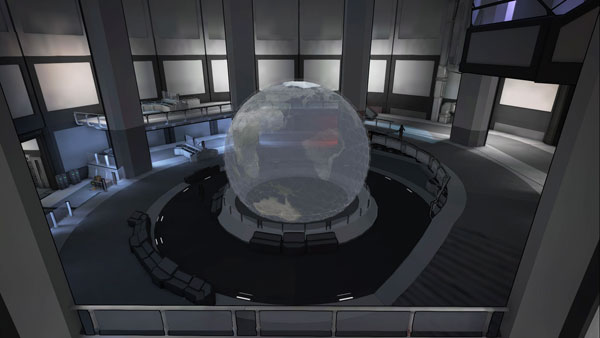 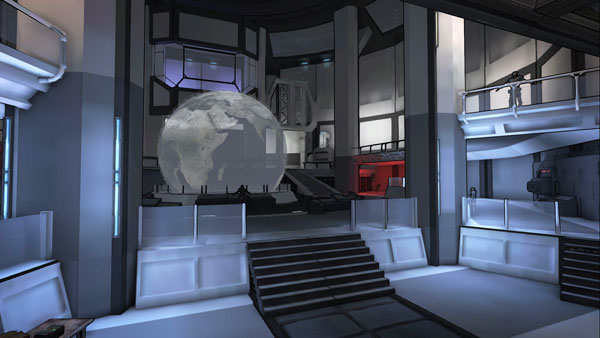 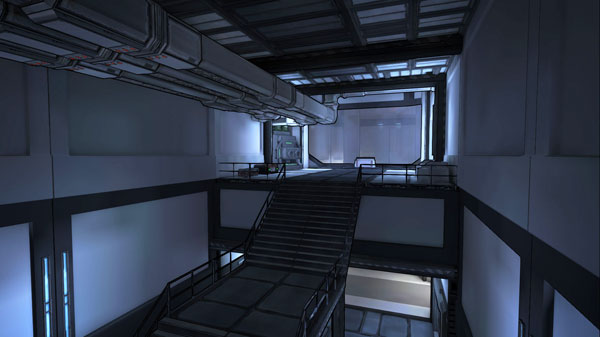 Left Top: First use in the level.

Right: Final mesh. (The texture doesn't fit on some parts of the top mesh but that was covered up in most cases) 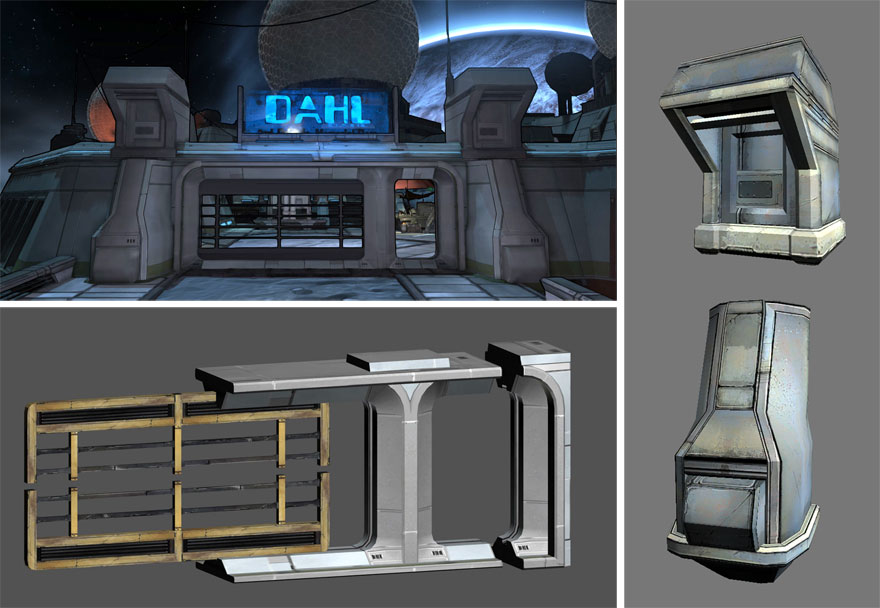 An artist from Gearbox suggested we use "heavy" support beams to make the existing buildings look more "badass".

So I extracted and modified some parts from another mesh and used them to improve the badassitude.

Later I made more sophisticated supports for the larger buildings and the bridges. 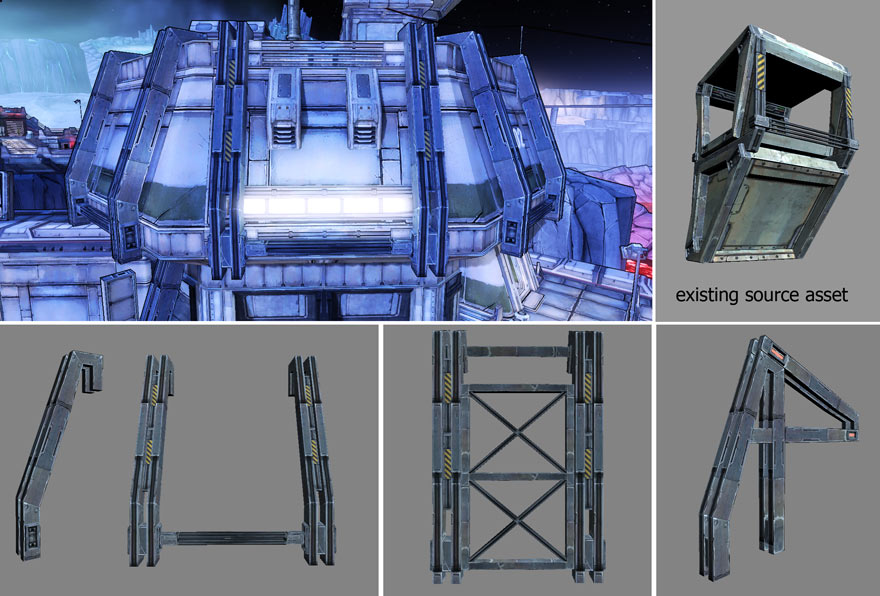 I kit-bashed this little relay station in the very beginning and it stayed to the very end. So eventually I turned it into a proper mesh using existing meshes and textures. 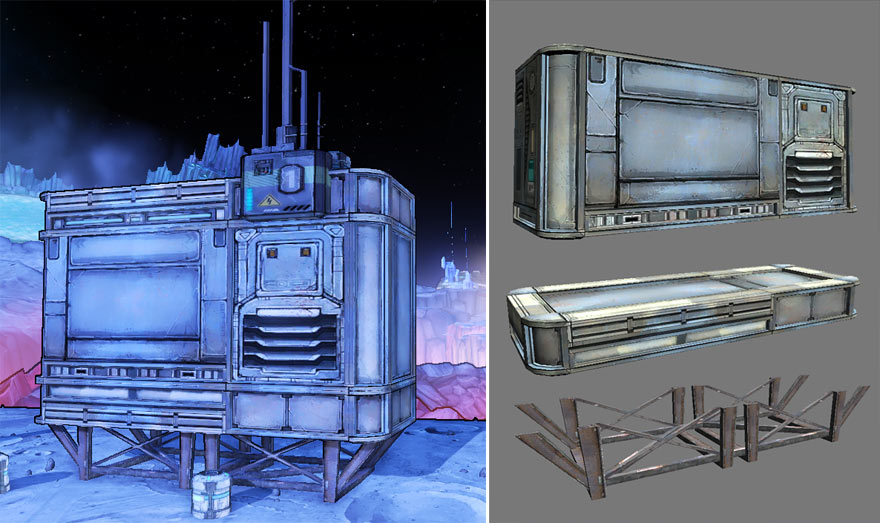 Another building we used multiple times so it was worth combining it into one single mesh to fix gaps, save draw calls, polygons and a bit of memory. 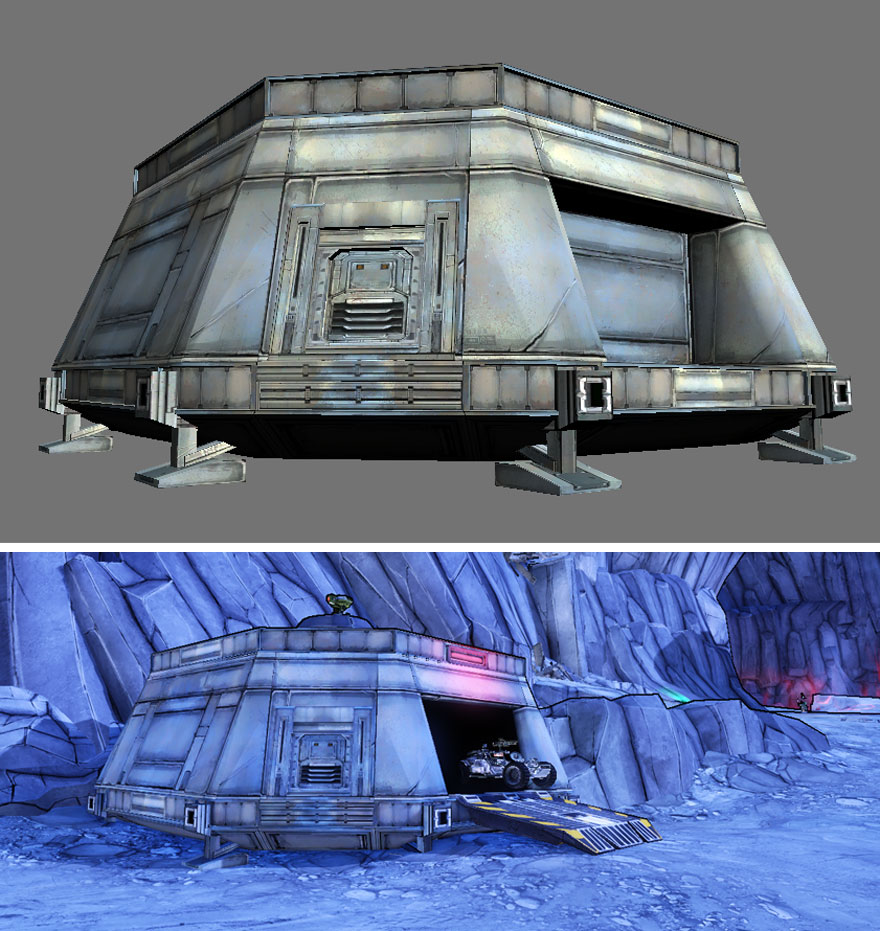 Triton Flats had some serious memory problems. We underestimated the cost of all the additional stuff we added to Borderlands 2. With a lack of time and manpower some of the detail was lost.

The final 2 or 3 days before content lock I was able to recover most detail of the train station by heavily combining and optimizing the building and platform meshes. 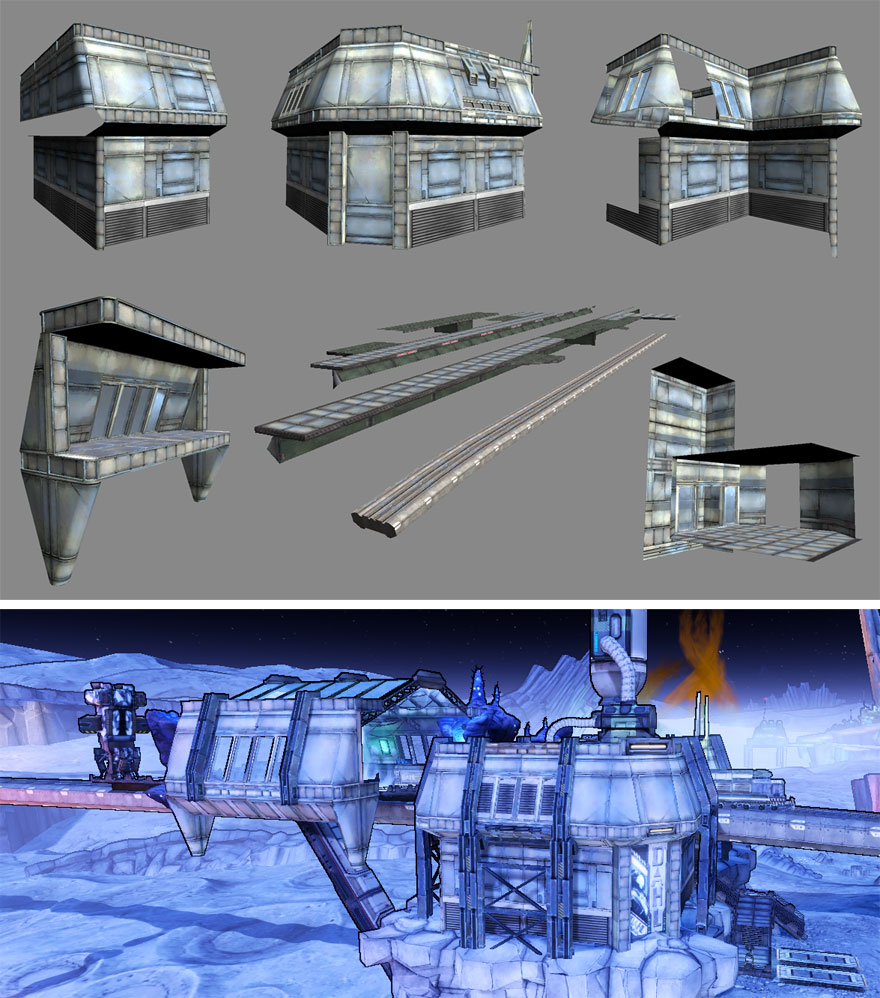 Not the most exiting work to do. Optimizing the collision by adding a custom collision mesh. It was the only way to get a good collision for this pool.

Collision has been a big problem even in the shipped game. We couldn't get all these areas solved in the limited time we had. Last minute changes didn't help either. 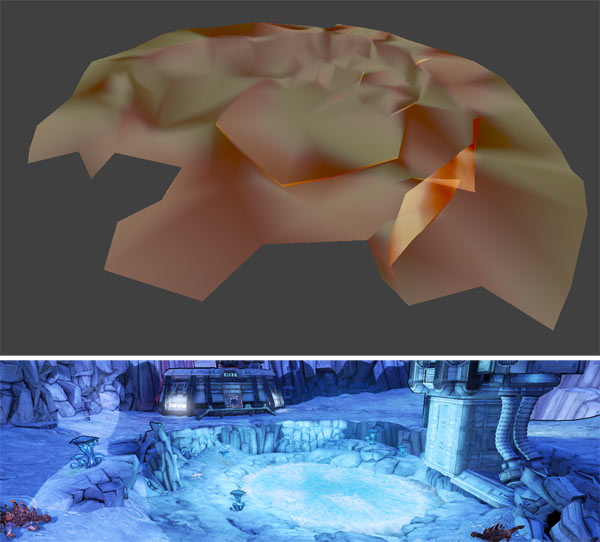