Pages in Level Art and Design

Stargate SG-1 was a first person shooter developed under the Stargate licence. I worked 18 months on this project until it got discontinued.

We used a modified unreal engine 2.5 to create the game content. My position was a level designer and I also helped out with some art assets.

This is the main Stargate room in the SGC. I was responsible for the SGC levels.

I worked on quite a few meshes in this level too. Mostly using already existing materials or meshes and modified them to fit better into the room or have variations. I probably touched every mesh visible here except the start gate itself.

I did the lighting as well. 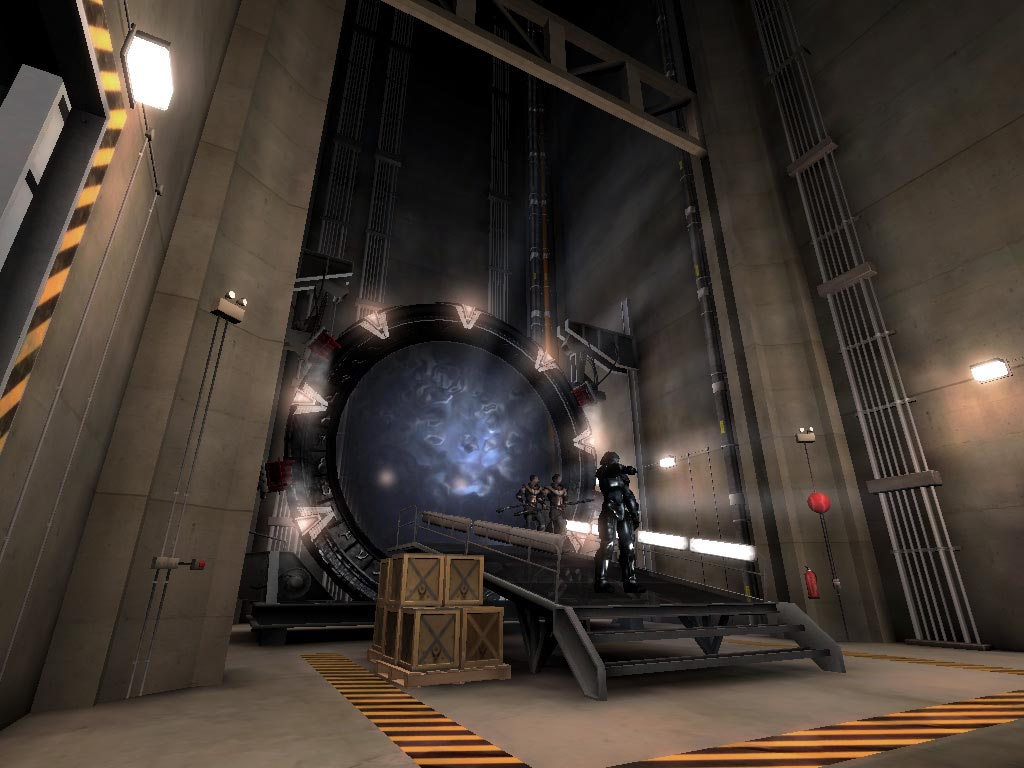 The control room of the SGC was already partly built when I took it over from Julian.

Over the weeks I updated the size, shape and content of the rooms from the blueprints we got from the TV show.

There is a video available now from someone who got hold on an alpha built. I think the 2 control rooms and the Stargate room itself are pretty much like I left them.

Some of the side rooms have messed up floor lineage. I guess they were not intended to be played in this level. 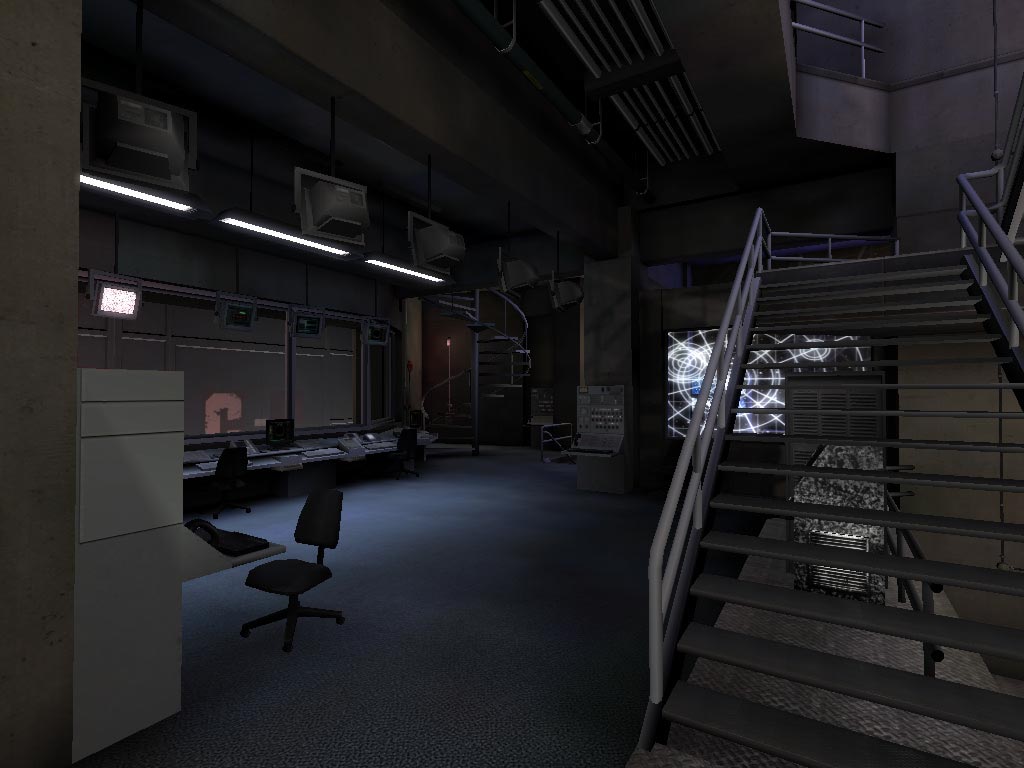 This is the meeting room above the control room.

It lives from the lighting which I set up in a moody dark tone. I also setup all the shaders for the self illuminating screens.

Most of the textures were done by artists but I modified the colour of a few or took screenshots from the monitors in the shows and used them for the monitor shaders in the building. 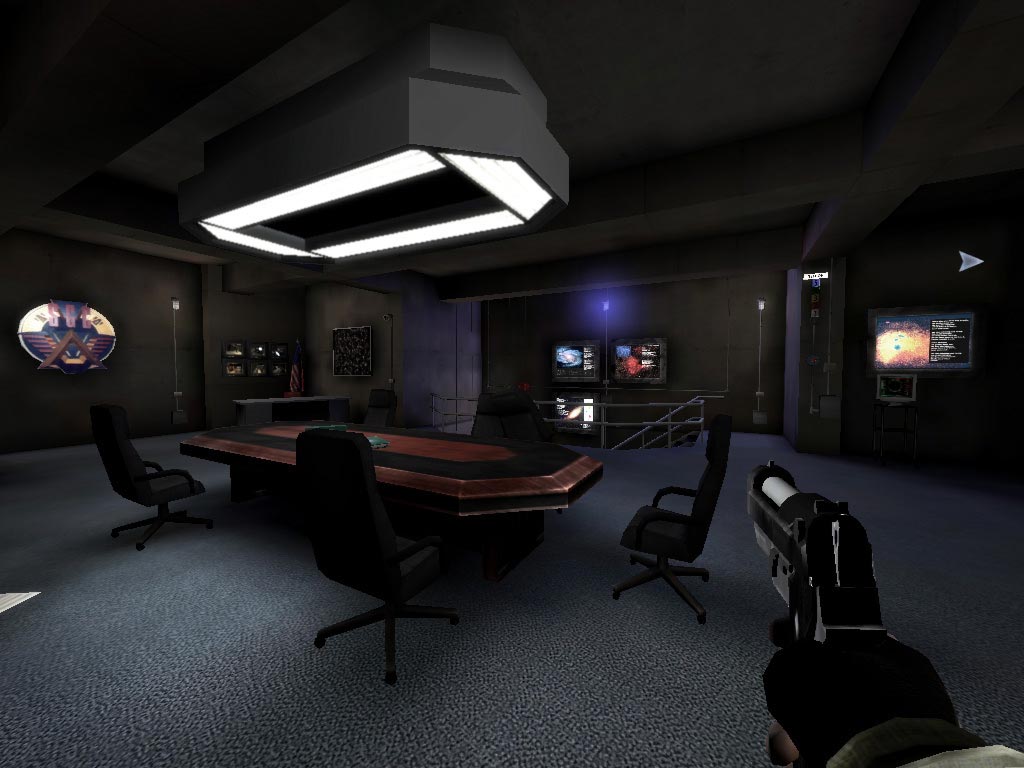 We had blue prints of the TV sets. The sets are quite small. Sometimes they use them from one side and then they shoot from the other, giving the illusion of a much larger space. So it was a bit of a challenge to figure out the actual layout of this area by watching the show. 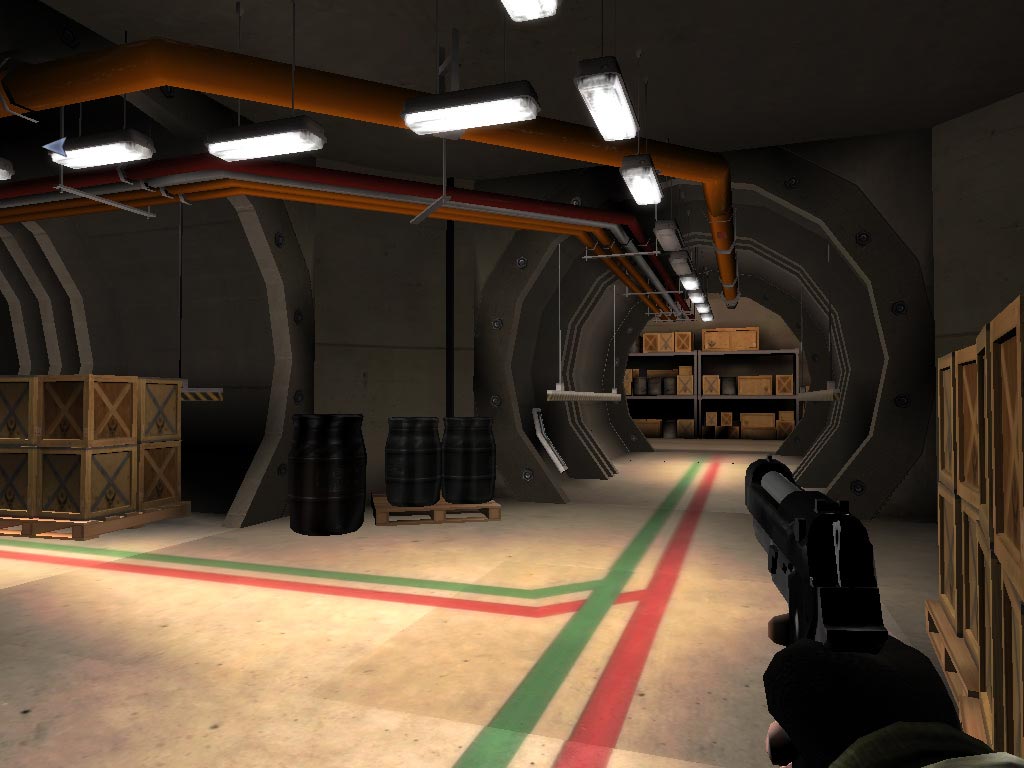 We did the same thing the tv producers did. We used standard segments and arranged them in different ways.

All the concrete floor and walls are made out of square segments. We had probably about 6 different types. The rest is done by adding additional details or swap textures.

I love working with modules. It gives the level designer better control over the environment and allows quick design changes even close to the end of the project. 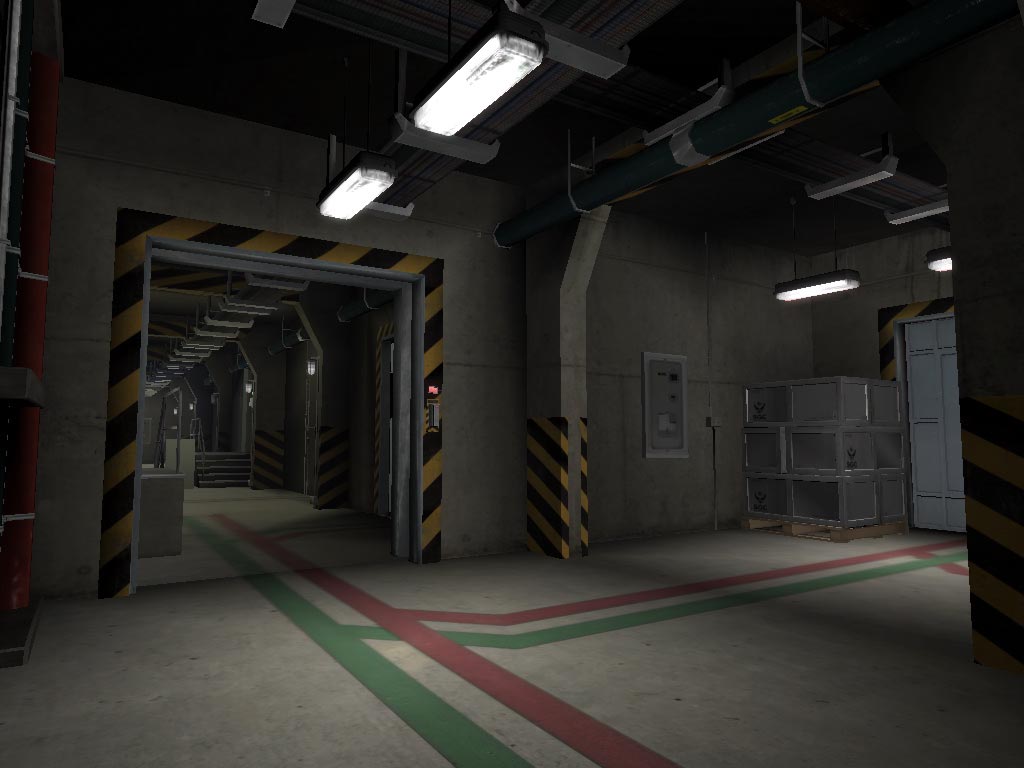 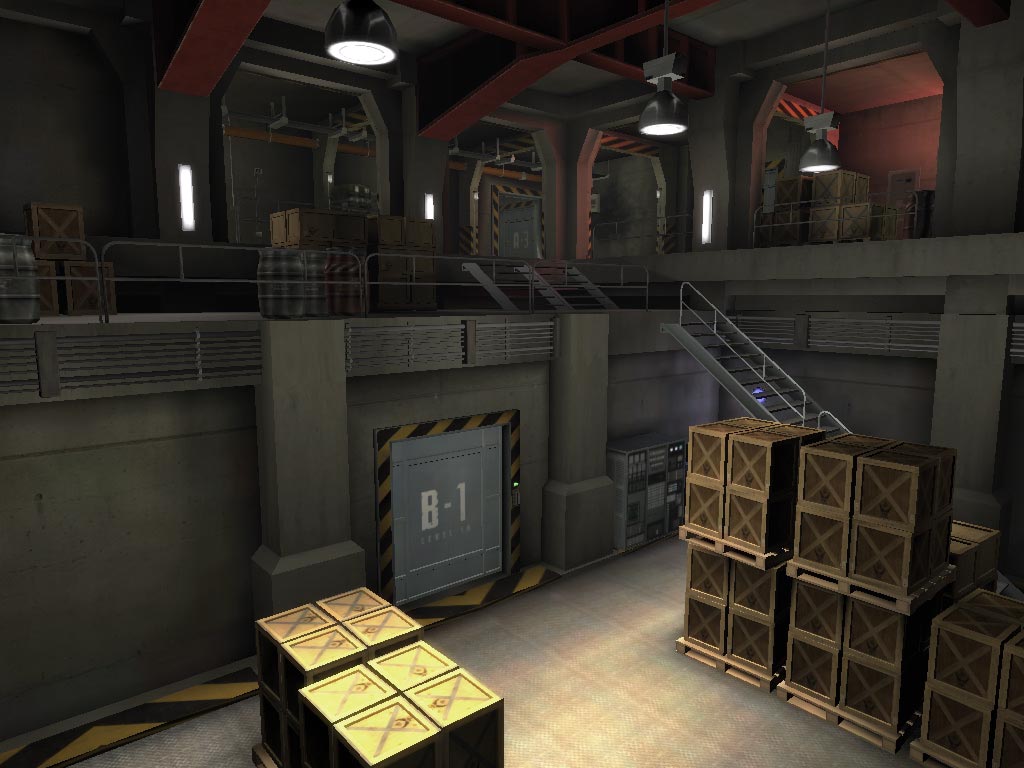 A large warehouse I created for the final section of the first SGC mission.

Most of the shelves are filled with one large mesh. Mirrored rotated or both gives us 4 variations. Plus a second texture set to add another 4 variations. Finally if you leave one or two shelves empty and fill them up with unique pieces from elsewhere noone will notice that its all made out of a very few elements.

This room is huge so I had to do something to keep the framerate up.

The XBOX was more or less able to handle the same assets as the PC version with downsized textures. Only occasionally I used PS2 assets on the XBox as well.

To be honest - I am not quite sure where the XBox screenshots start and the PC screenshots end. But the levels looked pretty much the same. 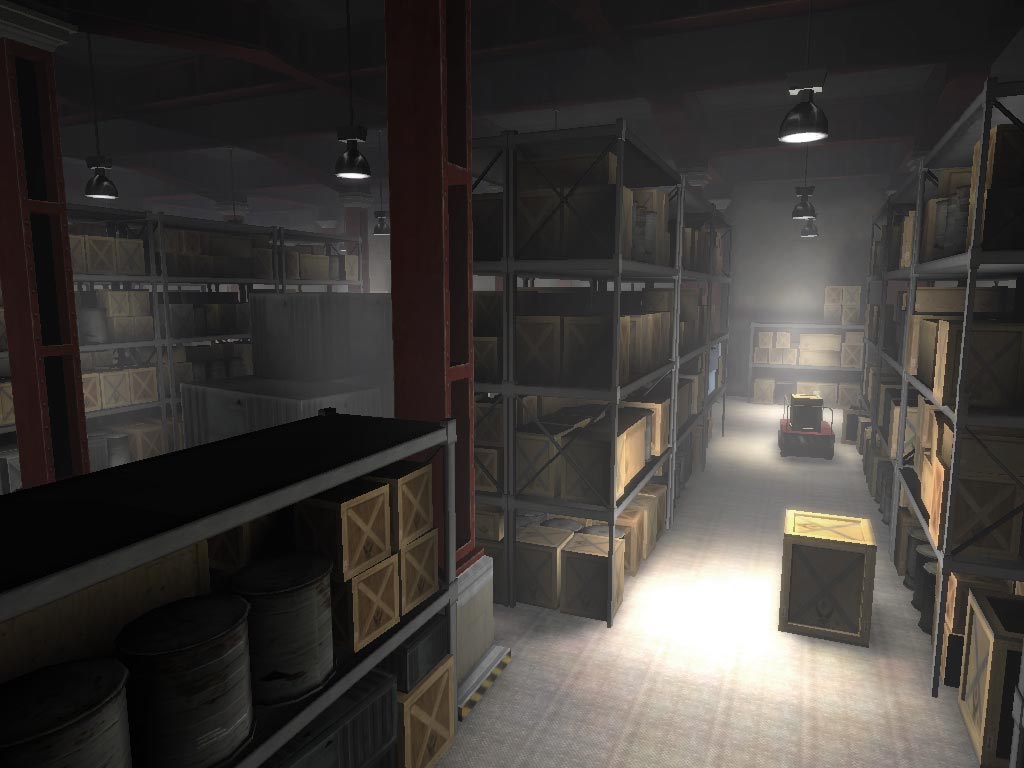 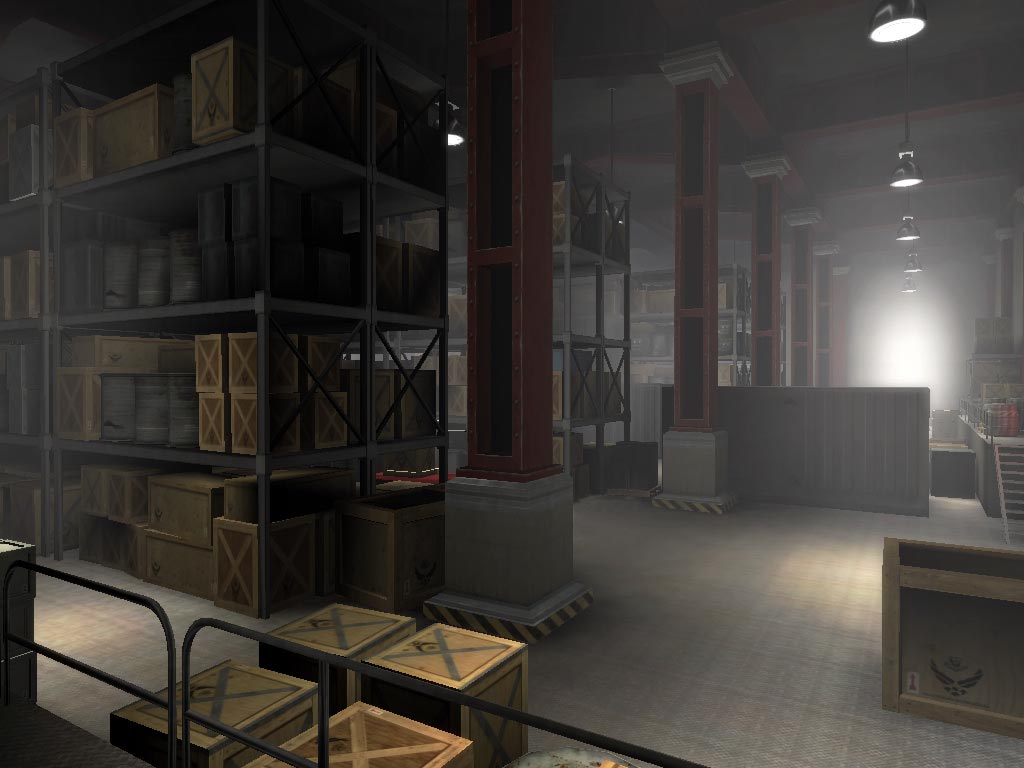 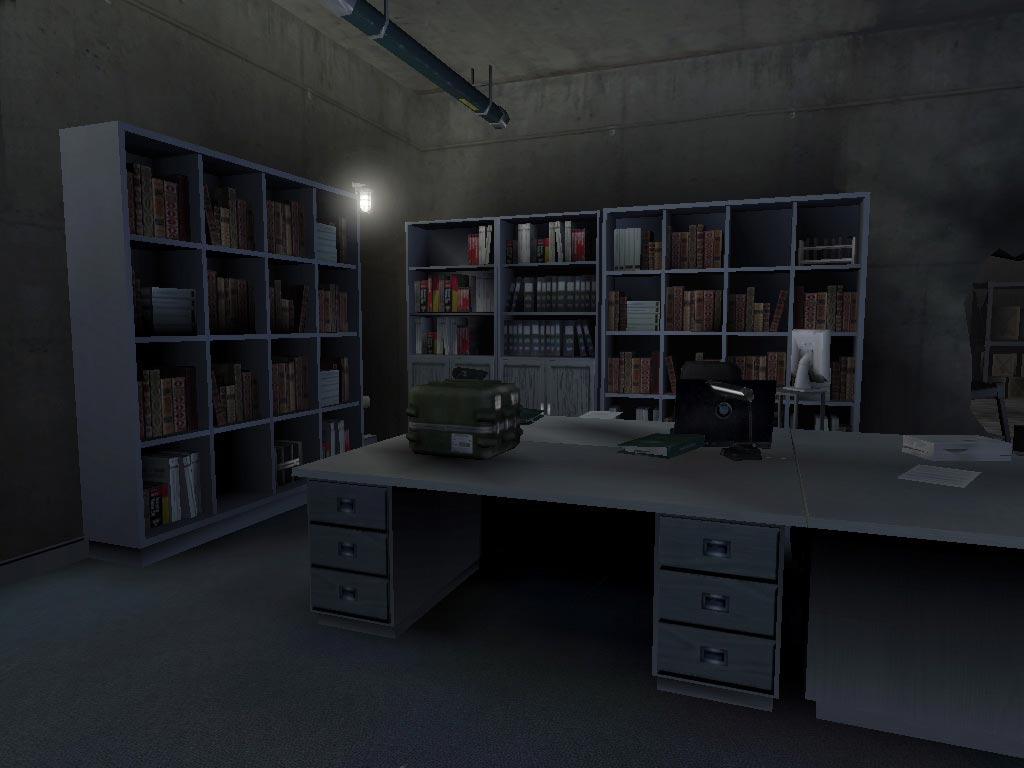 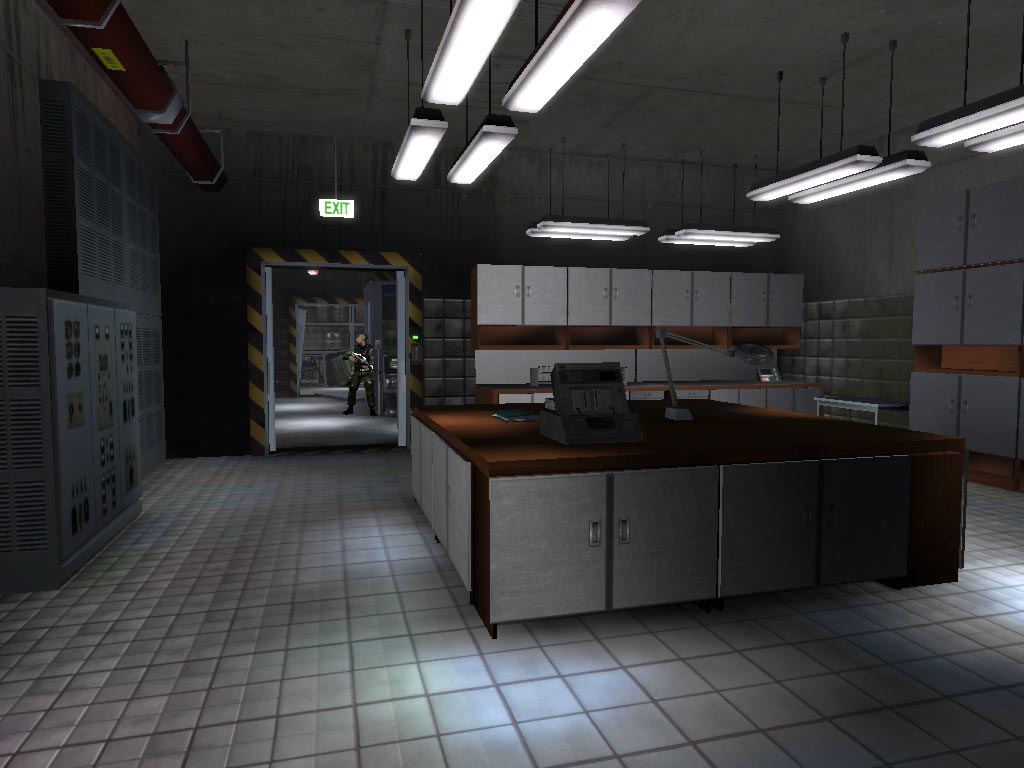 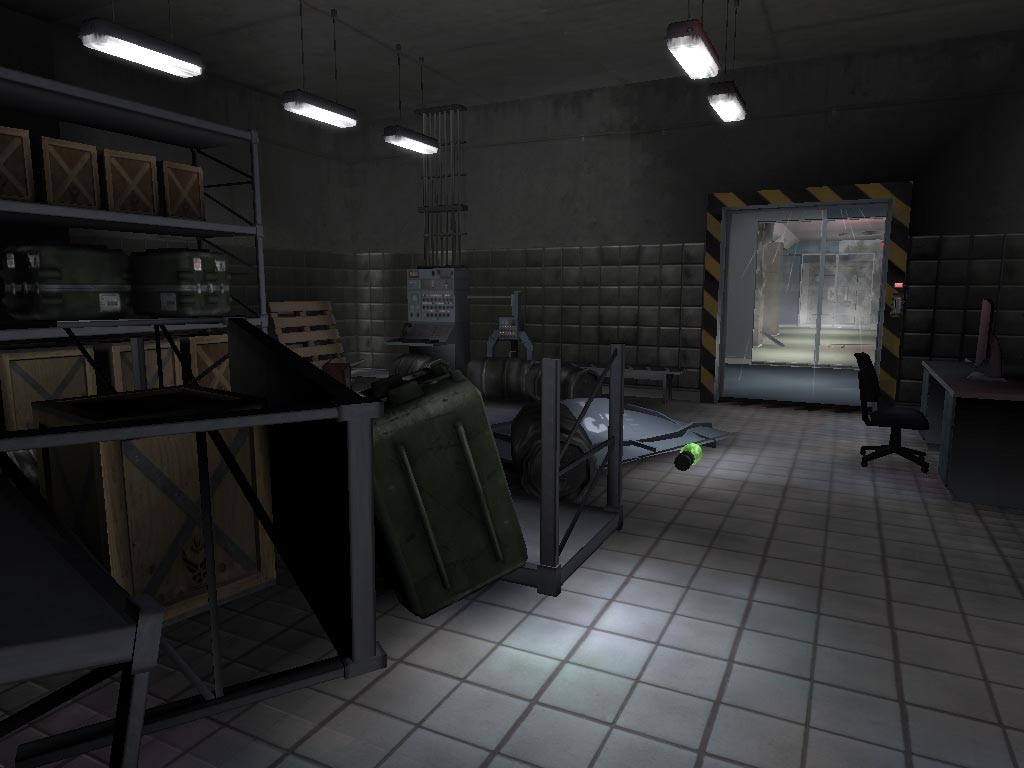 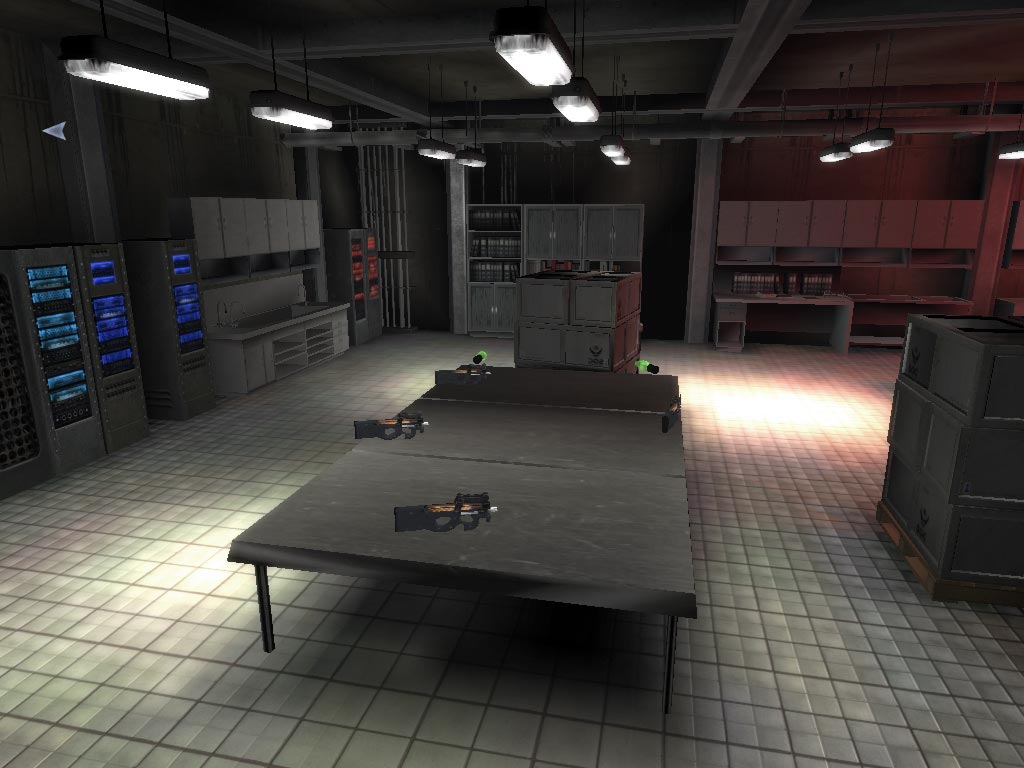 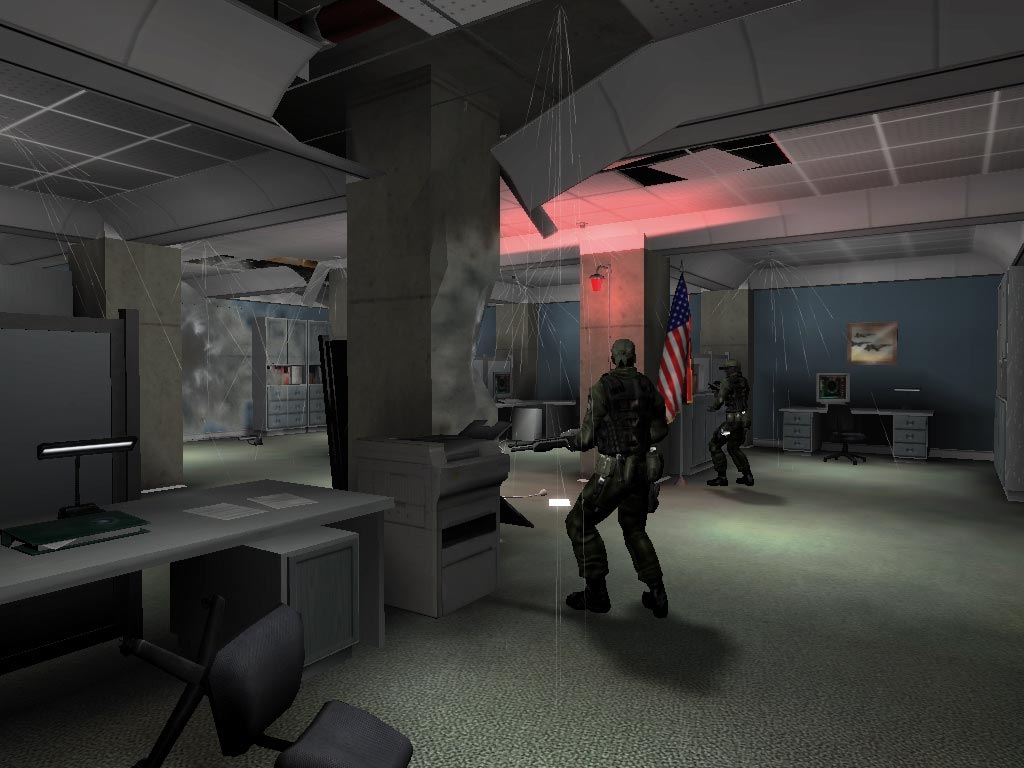 Working with unreal engine for the PS2 is a constant fight to keep the level in memory.

I simplified a lot of meshes, combined some or changed the texture size so they would fit into memory.

There is a sweetspot you need to find between mesh size and amount of instances or textures used. E.g all 5 monitors are combined into one mesh as far as I remember. Try and error a lot of times.

We didn't have to compromise too much in the SGC area. We squeezed the tiniest bit of memory out of every bit of the environment. 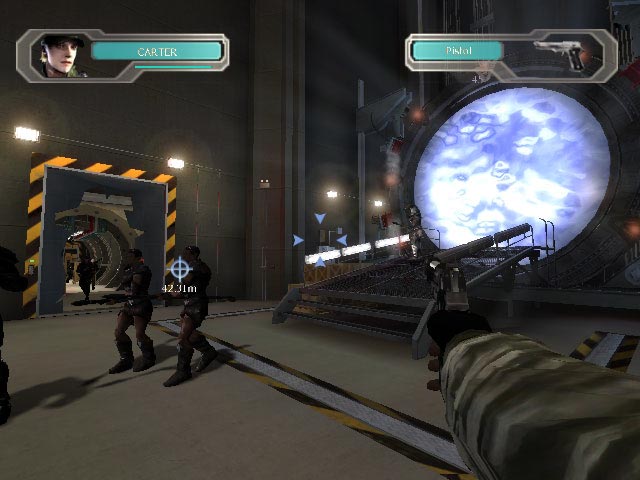 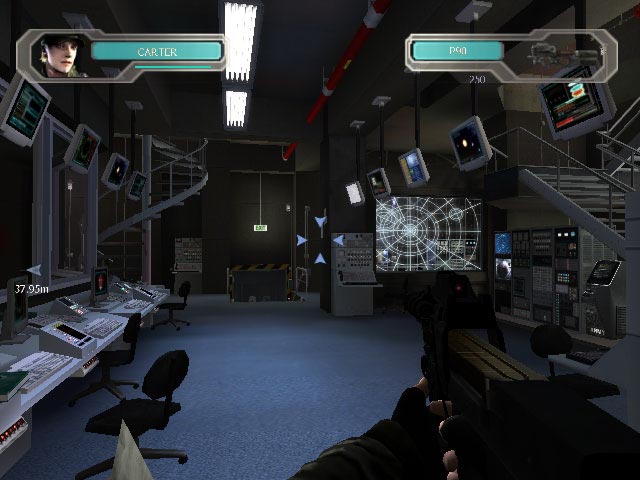 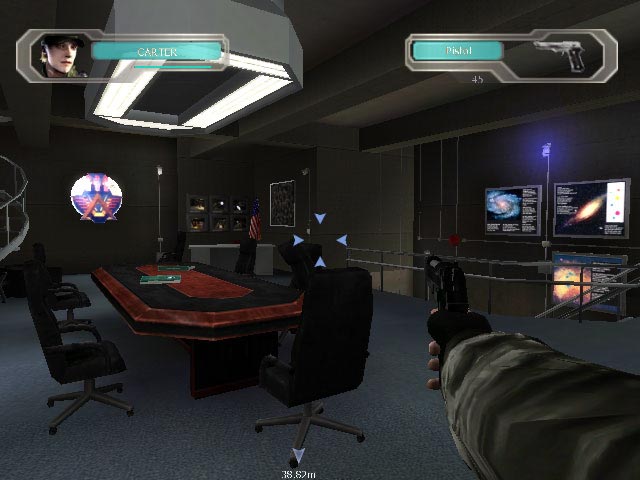 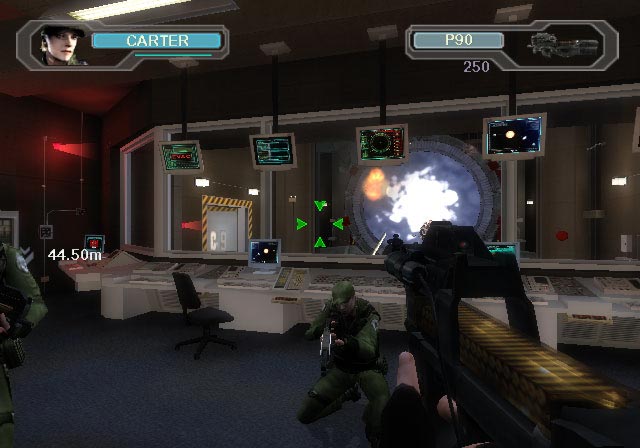 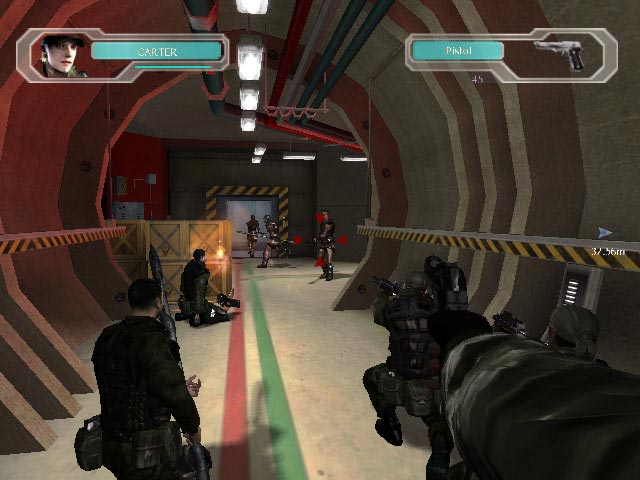 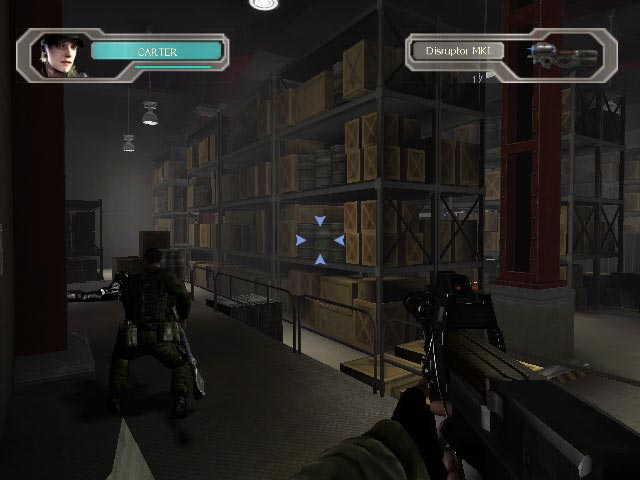 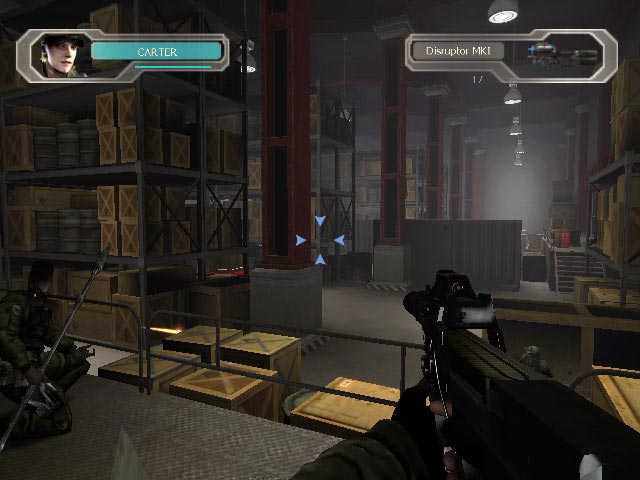 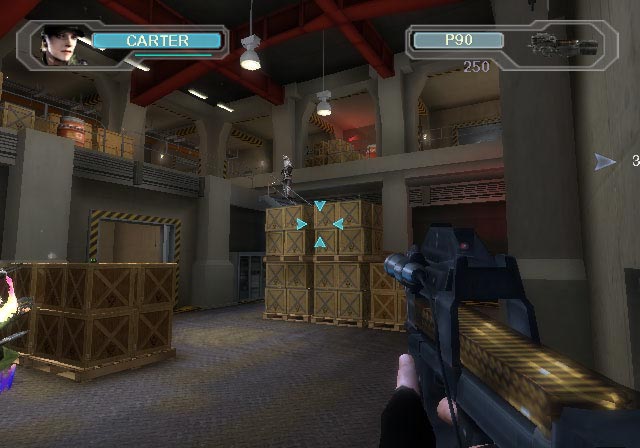 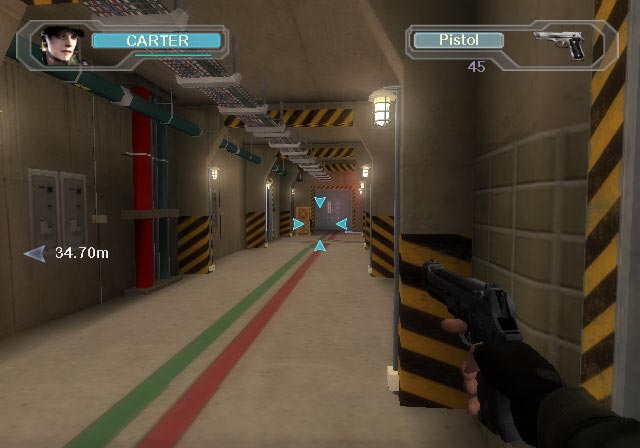 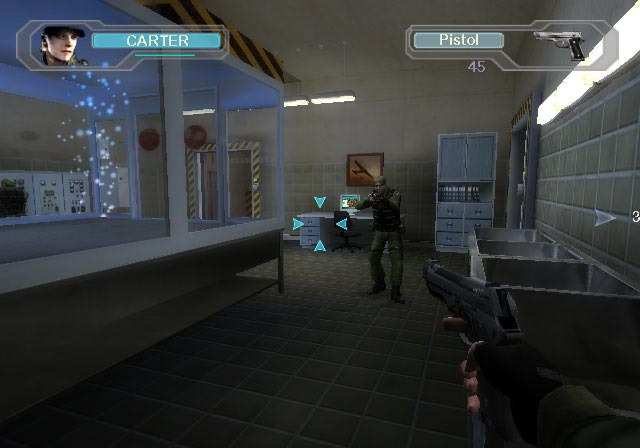 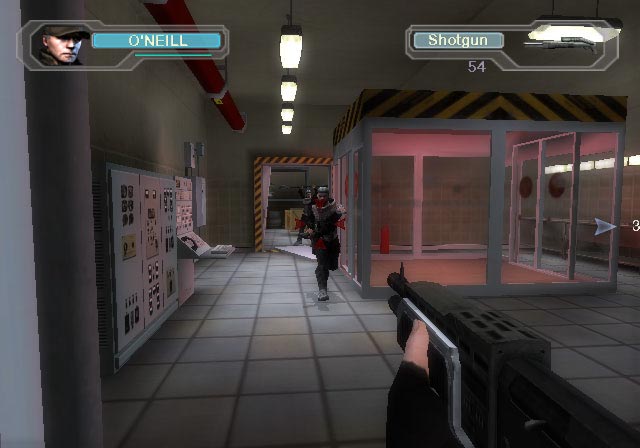 We had blue prints of the set, as I wrote before. But the set for the TV show only represents one little section around "E". By watching the show closely I thought that is how the floorplan of this level of the SGC has to look like.

The look and layout changed through the seasons btw. First they had CRC monitors and then they got replace by flat screens. Just to name an example. 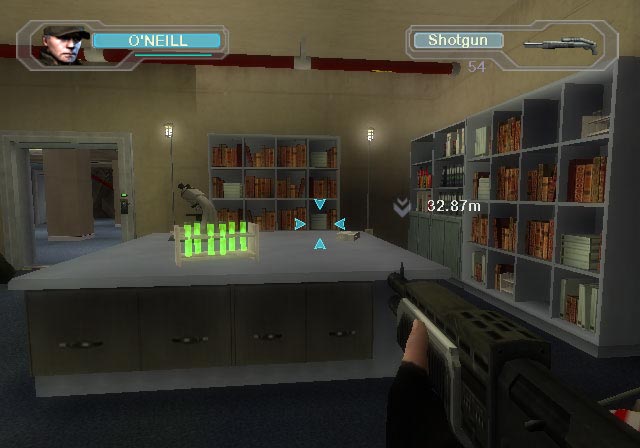 Another mission floorplan inside SGC.

the last mission floorplan same as number one before but different sections are open.