Pages in Level Art and Design

Here is some of my level work from Borderlands: The Pre-Sequel.
Remember that many people were working on this project together. I worked as a visual level designer and artist on these levels.
You find images here which might not show the final levels shipped.

This is the hub level for all Elpis levels in chapter 2. It is a huge level so we had to go easy on the details.

The 'Darksiders' own this level. They have a rocket tower right in the centre of the map where they worship fire and light.

The other large building is the train station which went through several iterations. I am quite happy with the final result especially as it was on the brink of getting stripped off all detail (like the big tower) due to severe memory problems of this level (not really level art related).

Some areas in this level ended up being a bit bare. With a short window to release a last generation game we eventually just ran out of time. 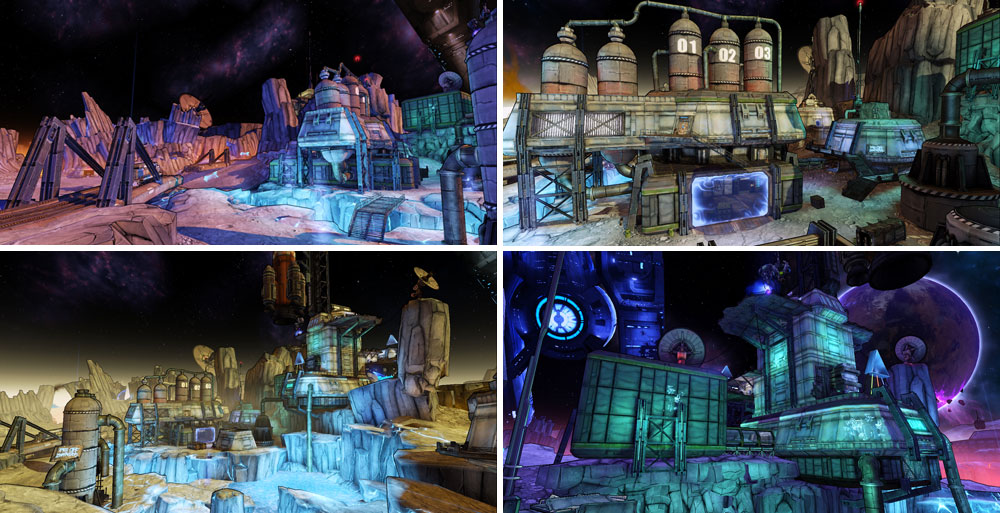 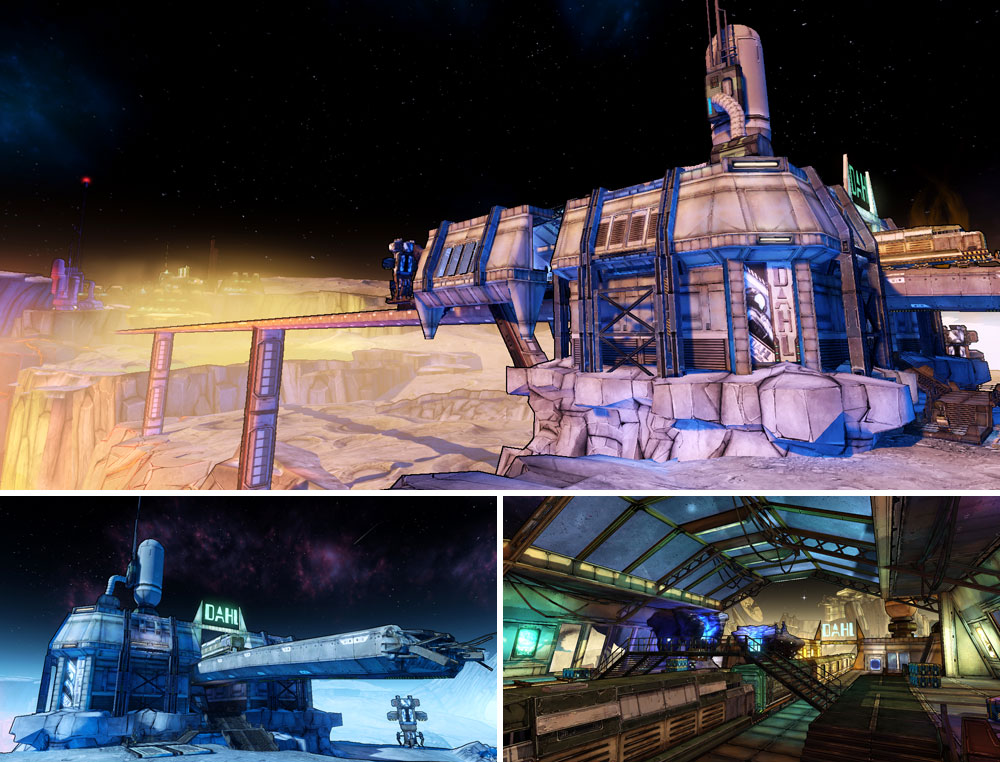 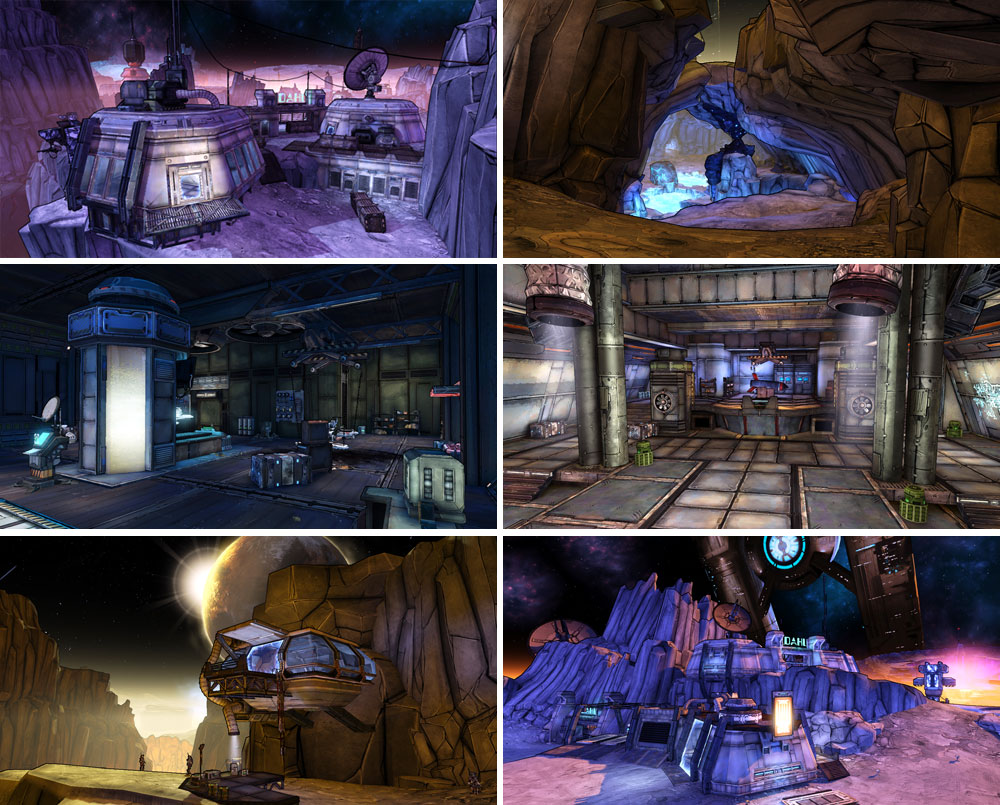 Crisis scar was the first level we showed to the public. It started as a level vignette based on a concept art. We wanted to find out how Elpis actually looks and what kind of buildings would be there.

Gearbox helped us to find the final look for the PAX demo. Especially how to do lighting, materials and the background.

We tried to find a building structure for Elpis that matches DAHL's weapon look but wouldn't be the same as the ones used in Borderlands 2 on Pandora.

We made a set of modular flexible pieces to construct these buildings in various ways. At the end most of them were combined into larger meshes for performance and optimization reasons.

The inside of the observatory was only shown briefly during the Pax Demo. Although it is round all construction pieces were modular. The layout did change a few times. Because if you give someone the possibility to make changes he most certainly will.

We kept most of the PAX demo unchanged for the final game. This made Crisis Scar one of the more detailed levels that still runs well. We could spend a bit more time on polish and optimization. 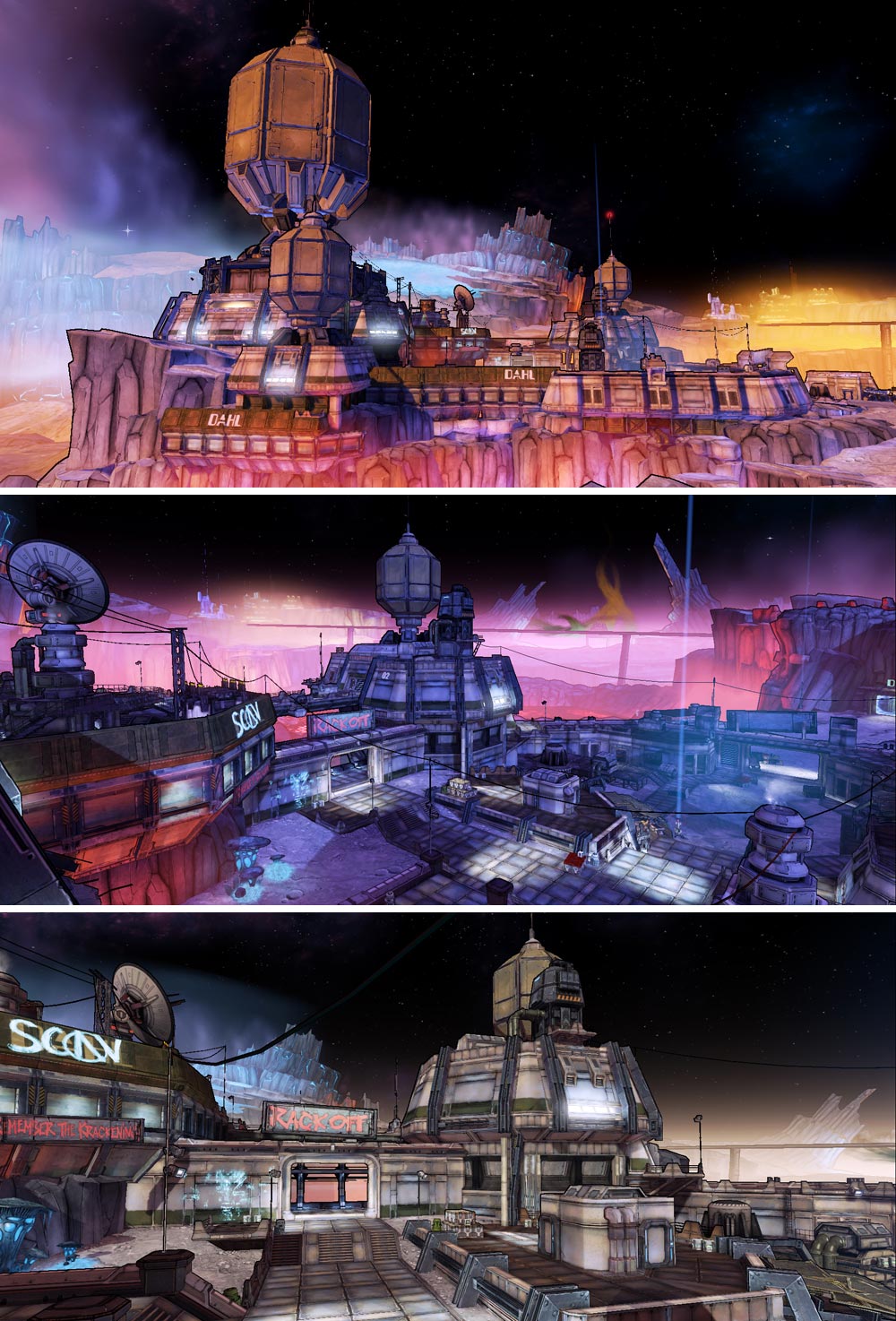 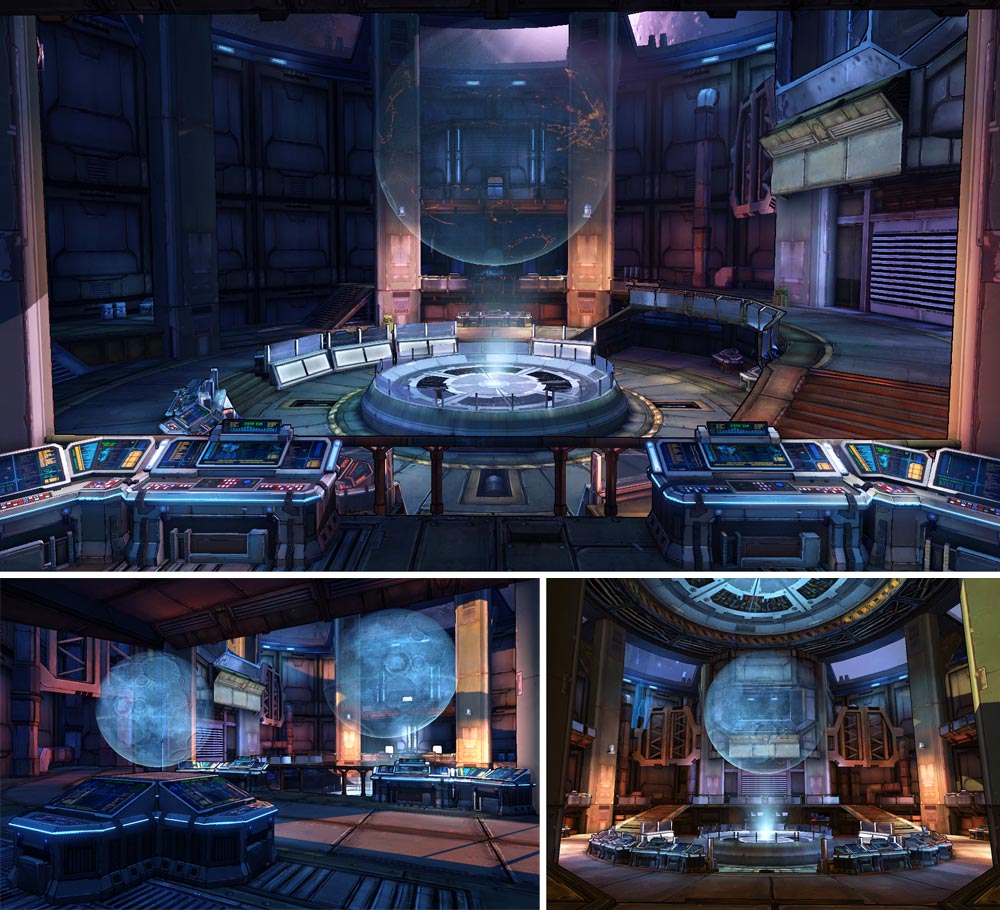 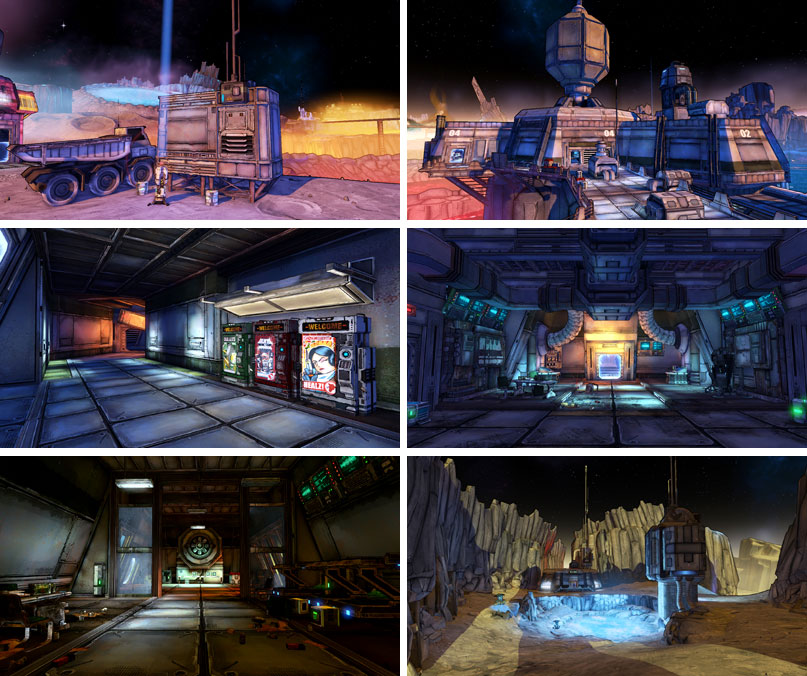 This image shows an older version with different materials applied that gave the structures more contrast. This was before Gearbox helped us to modify the materials to look more like the typical Borderlands bad-ass style.

You can also see how little the level changed if you focus only on the layout. 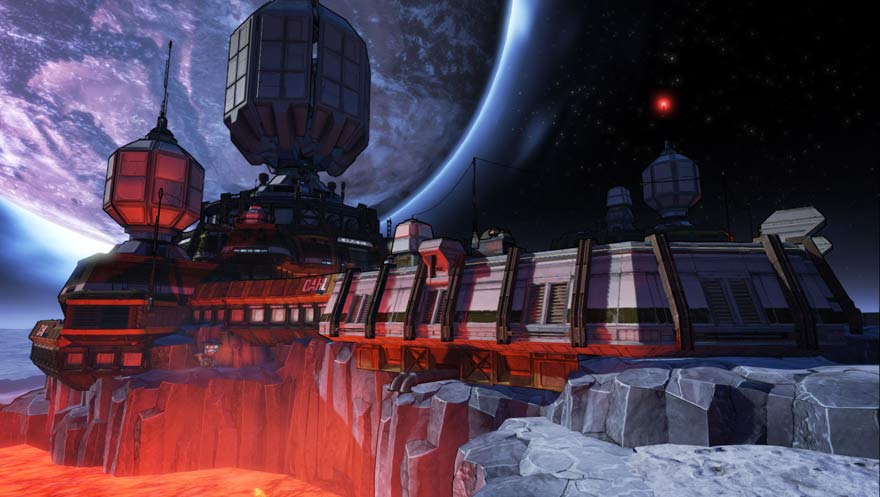 Stanton's Liver was split off from Triton Flats because we didn't have enough memory on the consoles. The rudiment of this level is a survivor of the very first experiments I did with the Borderlands 2 editor.

The main layout with bridge, refinery and train station were always the key areas of the level. Even when Stanton's Liver was still part of Triton Flats.

A few people actually contributed or added areas to this level. The level became bigger over time. Gearbox did a great polish/detail/grunge pass on this levels.

The level probably comes closest to the visual style used in Borderlands 2. The back view reveals how much detail in this level is. 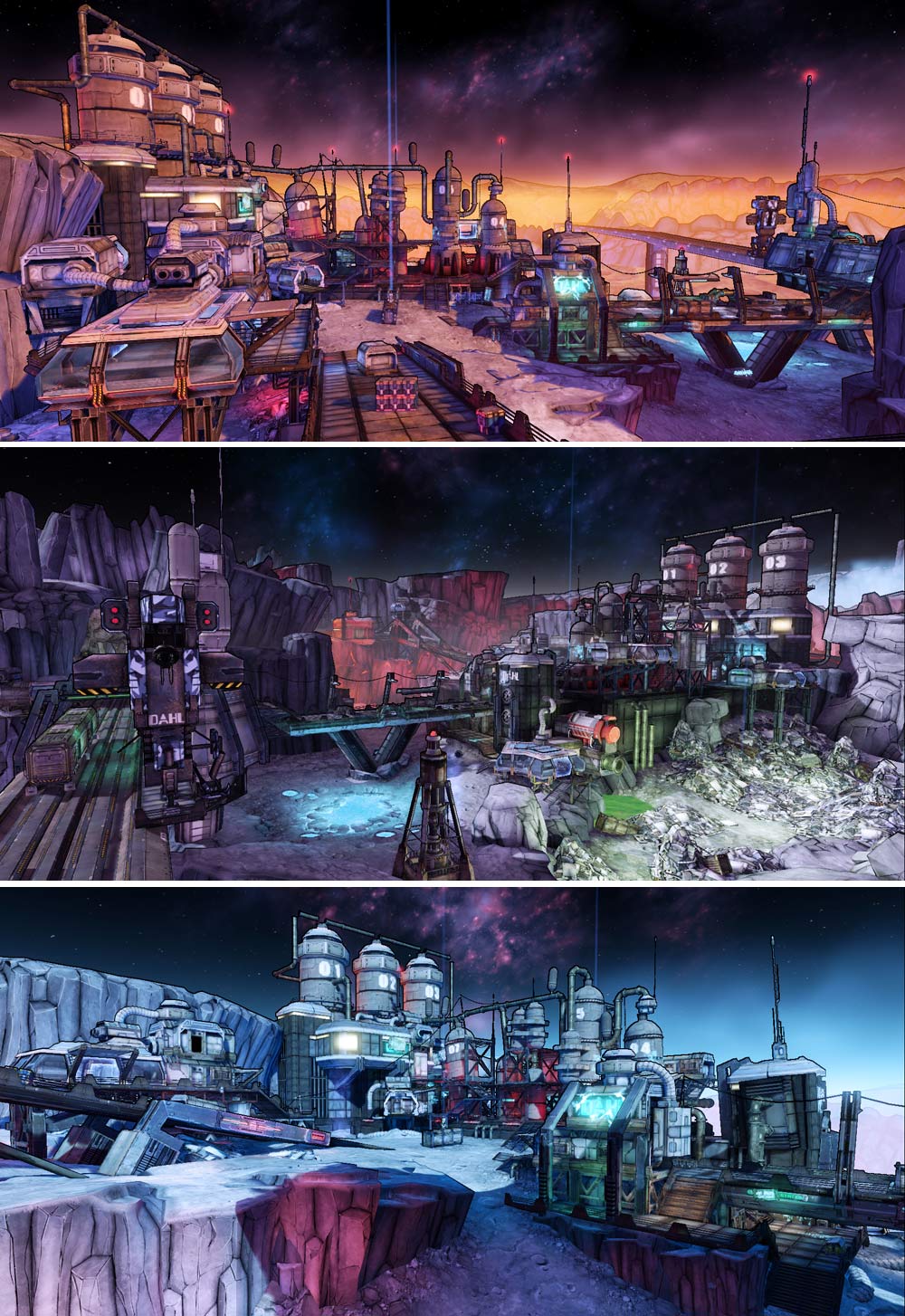 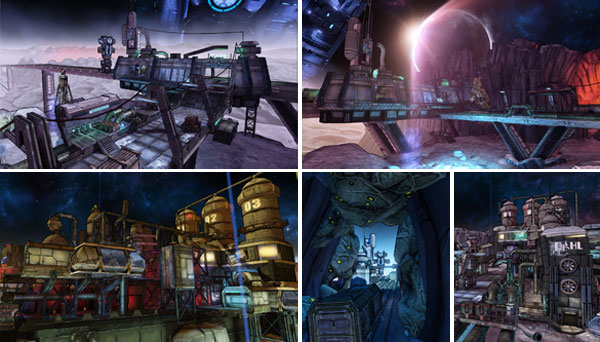 This is one of the Borderlands typical arena levels where the player can fight increasing waves of enemies. This became the bonus level for anyone who pre-ordered the game.

This is the only level in the set which has quite a bit of destruction in it. It's also quite small so we didn't have any memory problems. Only performance would hold us back here.

Again a few people made this level what it is. I'm happy with the result.

Being an arena level the gameplay had the highest priority. We artists really just made it look good.

The small sealed off rooms in the fighting arena are mostly just for breathing air and getting out of the action to recover. 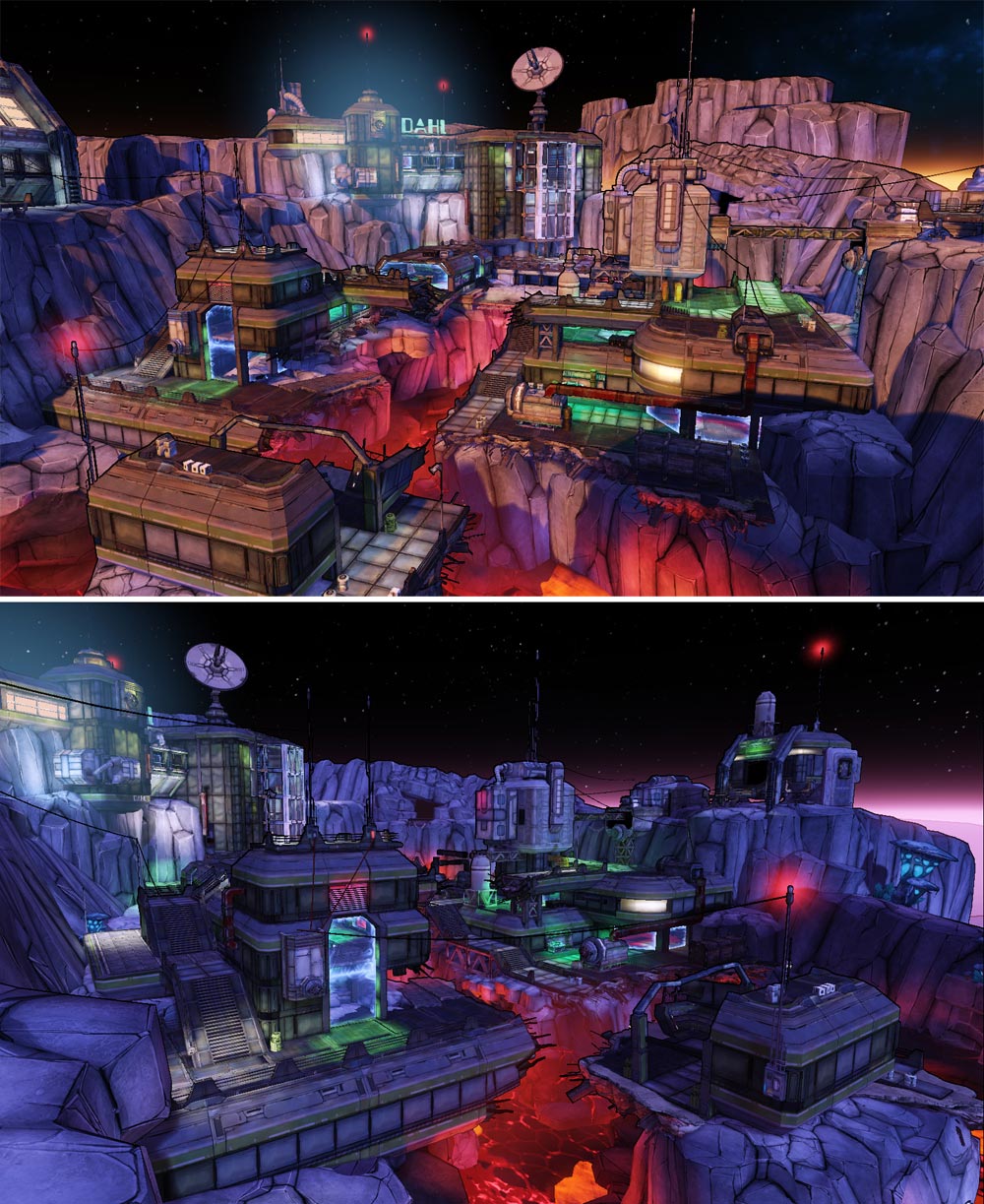 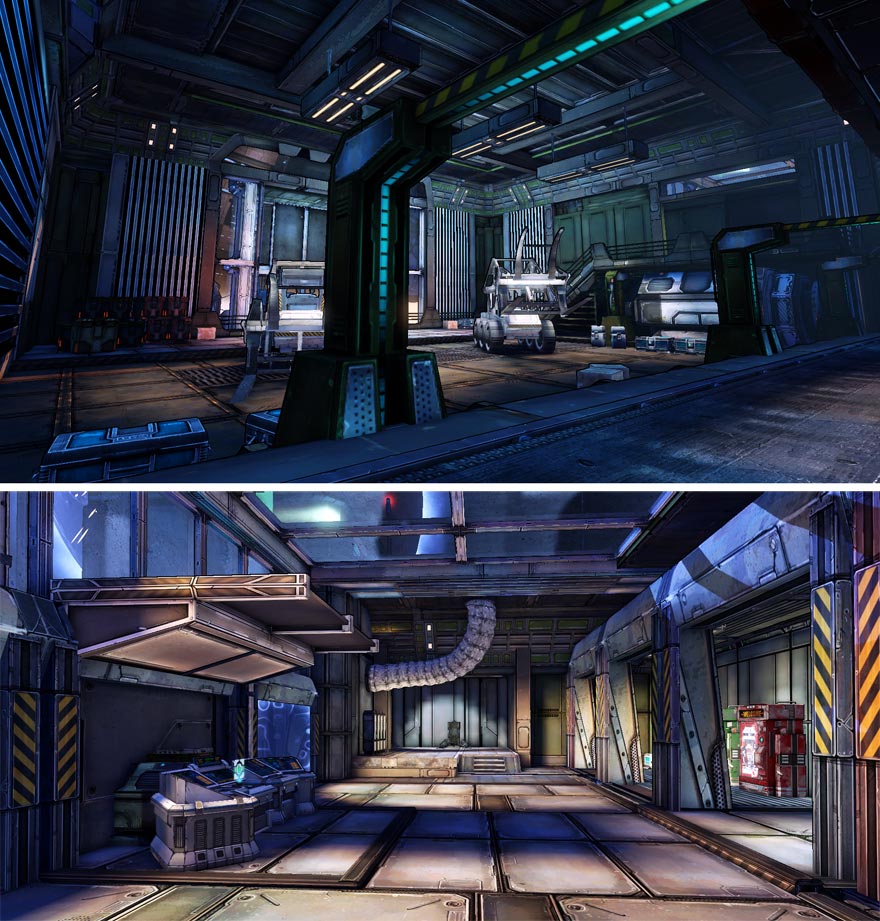 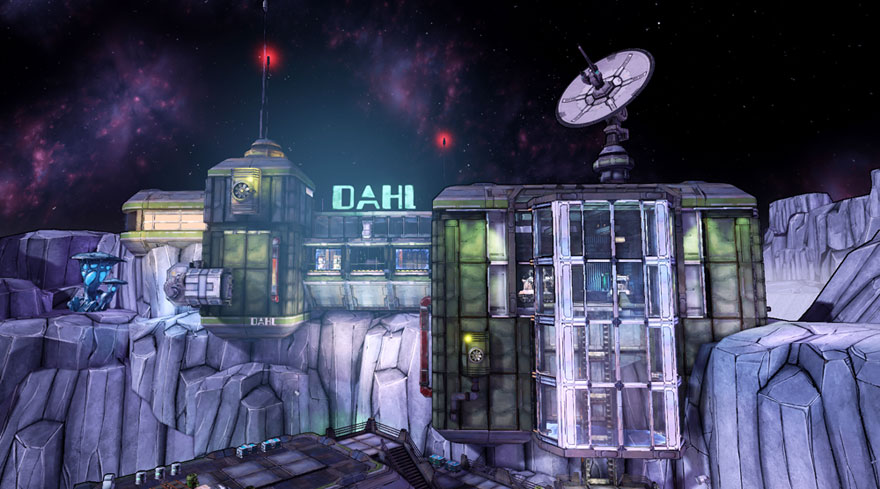